Use this link to book a fitness class or one of our squash courts.

Use this link to book our indoor and outdoor courts as well as our 3G and grass facilities.

Use this link to sign up to a Direct Debit monthly membership.

Use this link to sign up to a fixed term pay-up-front membership.

Hull FC and the University of Hull have unveiled plans for a rugby league performance, education and community hub.

Based at the University of Hull, the hub will unite Hull FCs rugby pathways from first team to grassroots for the first time, as well as see University of Hull students offered work placements in key fields such as sports science, coaching, analysis and media.

The £1.5m project, which has also received financial support from Hull City Council and other key stakeholders, will create an unrivalled home for the club’s various teams and community rugby league activity as well as enhance the University’s first-class sports provision further.

“Offering our students the best opportunities and experience whilst at University and beyond is our top priority and this partnership will create some truly exceptional opportunities.

“We’re proud of our history of raising education aspirations through sport and through this partnership, both Hull FC and the University will be able to continue on that path on a greater scale.

“It is a unique partnership in the education sector which reaches far beyond just sport and facilities, we will use rugby league and the partnership to create a clear pathway to higher education for young people across the region. The partnership naturally creates some amazing teaching and research opportunities for Sport Health and Exercise Science students, however opportunities and benefits exist across the whole of the University from the Business School, Media Studies, Teaching and our own Rugby League programme to name a few.” 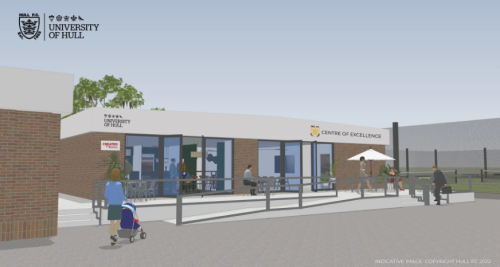 In a unique aspect of the partnership, the club’s blossoming Centre of Excellence will also be based at the new hub, providing an unrivalled playing, training and education experience for young players as well as progression opportunities into higher education at the University.

The Centre of Excellence continues to grow from strength to strength, with over 120 male and female players enrolled in various squads from September 2022, who will now benefit from some of the best facilities in the city as they embark on a career in professional sport.

The project will also see Hull FC providing student placements for Sports Health and Exercise Science undergraduates as well as for other courses including media and marketing.

Students will be able to oversee and attend Hull FC training sessions, complete coaching and match official’s courses through FC and the Universities men and women’s rugby league programmes will be coached by Hull FC which will ensure the facility will not only provide players of the future, but also coaches, staff and officials.

Hull FC have also committed to a studentship, whilst applied research projects will have the dual benefit of ensuring Hull FC is at the forefront of performance science, whilst enhancing the career prospects of students.

The purpose-built hub will mean the Black & Whites will have a long-term base in the city, whilst also benefitting from the University’s world class facilities.

It will offer enormous benefits not only to Hull FC and the University, but also the wider community, by creating an inclusive, high-quality provision to increase engagement and participation in rugby-related team sport coaching, community and education, regardless of background, age, disability or gender.

It is hoped that the new partnership will inspire a legacy for rugby league in the city, with a 110 per cent increase in participation targeted within the first five years.

Hull FC will now benefit from international-standard sports facilities at the University, which is also an official partner of Team GB, as well as a regional base for the Football Association and Super League netball, and recently hosted the final of the Rugby League Wheelchair Challenge Cup.

The funding will also enable an extension to the existing University sports Pavilion to provide a home for the club’s first-team squad, development pathways and community activity – set to open in autumn 2023. 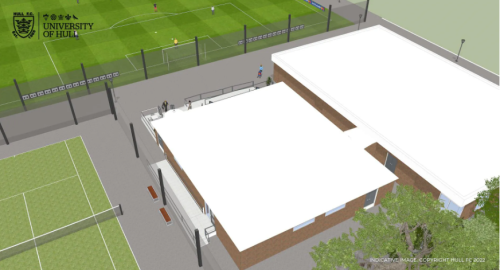 The new facility, which will include changing facilities, medical rooms, a video analysis suite and a clubhouse for players and spectators, will also be used for match days outside of the first-team squad, including academy, women’s and University teams, as well as providing a facility for local rugby league teams.

The partnership with Hull FC adds further value to the student sporting experience as they will coach and coordinate the Performance Rugby League Programme at the University.

In addition, a number of Hull FC Community Foundation initiatives will also be based at the University, including the successful wheelchair rugby league team, PDRL squad and women and girls’ rugby league squads, as well as personal training fitness courses and mental health workshops which will be open to students as well as the public.

The first major milestone will be the upcoming Rugby League World Cup of which Hull is a host venue.

International team Fiji Bati RL, one of Hull FC’s international development partners, will be based at the University of Hull for the tournament, running from October 12 to November 19.

Hull FC Chief Executive, James Clark, said: “This is a landmark moment for our club that has been years in the planning, as we strive to better ourselves on and off the field.

“We can finally boast international standard facilities and programmes across our entire club, but also create a lasting legacy at the very heart of our local community and grassroots rugby league which epitomises the hallmarks of Hull FC.

“An extended eight-year Centre of Excellence pathway from 14 to 23, including education and work experience, is an unrivalled opportunity for young rugby players in this city, as well as providing our first-team with the highest standard of training facilities.

“We must thank all the key stakeholders involved, including RLWC2021 and Hull City Council for their foresight and dedication in helping us make this ambition a reality, in particular Jeremy Hartley, Steve Curtis and the senior leadership team at the University of Hull.”

“We congratulate Hull FC and the University of Hull on this landmark and forward-thinking initiative, and we are delighted that the Council can provide match funding to support services at the new centre.

“We are determined to improve the health and wellbeing of people in the city and we look forward to seeing this incredibly ambitious programme come to fruition; it is a fantastic development for sport and our city”.